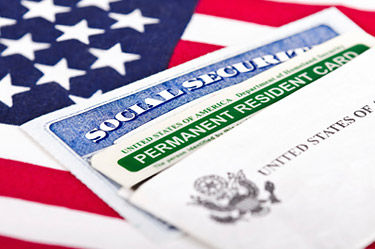 Obtaining a green card means obtaining lawful permanent resident (LPR) status in the United States. An LPR is eligible to reside and work in the U.S. on a permanent basis. An LPR may also travel internationally with certain restrictions and petition for certain family members to become U.S. residents. Immigrants obtain green card status through two major processes - consular processing and adjustment of status.

Consular processing occurs when the intending immigrant is outside of the U.S. and applies for an immigrant visa at a U.S. embassy or consulate. When the immigrant presents the visa at a port of entry and is admitted into the U.S., they become a permanent resident. Adjustment of status is the process by which eligible immigrants apply for green card status while in the United States.

While there are many paths to obtaining a green card, most intending immigrants must be beneficiaries of an approved immigrant visa petition. The two major paths are through employment and family.

Individuals who are eligible for the EB-1 classification can file directly for their green cards without going through the PERM labor certification process. The three categories of EB-1 are: Individuals possessing extraordinary ability in the scienc… Read More

PERM stands for “Program Electronic Record Management” and is the current process for application for labor certifications (LC) with the U.S. Department of Labor. The PERM LC process is the first of a three-step process for most employment-base… Read More

Spouses, parents, and children under 21 of U.S. citizens are considered “immediate relatives” under the immigration law. They are not subject to numerical limitations on immigrant visas and therefore there is no requirement to “wait in line… Read More

U.S. citizens are eligible to apply for a fiancé(e) to enter the U.S. for the purpose of immigrating if certain requirements are met: Must have met in person within the past 2 years Must demonstrate intent to marry within 90 days of immigrant’… Read More

Removal of Conditions on Residence

Immigrants who have been married less than two years at the time they obtain their marriage-based green cards are granted conditional permanent resident status, which is valid for two years. Within the 90-day period prior to expiration of the status,… Read More

How Can We Help?

Fill out our online form